The highest sound and durability

A new material body reproducing a wooden body and a classic style without fading produce the highest sound and durability.

Add "Low Key" & New Scale" to cover a broader style.
Continuing to evolve into a model without blind spots.

The world of 10hales harmonica is entering a transition period in which various playing styles are born from the mature playing style so far. In recent years SUZUKI responded quickly to that situation and has always challenged a number of ambitious works to respond to the creation of players. MANJI was born as the ultimate standard model which can also be called culmination.

Why Manji is special and attracting players 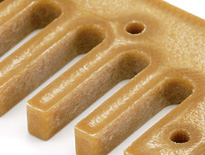 Having wooden tone and made by new materials that combine plastic playability and durability. 50% of the material is composed of natural wood fiber.

There are countless small spaces that absorbed water and nutrients in wood materials that produce warm tones. In the same way this body also reproduces its structure inside.(See above pictures.) The solid body reinforced with natural wood fiber produces a sound that is different from ordinary plastic body, and the body itself transimit a sound that makes like entire harmonica groaning. Of course, due to the synthesis with resin, there are no problems such as deformation due to moisture, so that player is not bothered by deformation of the wood.

In response to the request of Blues and Rock Harmonica players, the cover style which the back side is all open, the flow of sound from various angles is also designed. It also has a big sound hole on the both sides, which gives the performer the best sound return. Repeated trial and error with the professional player, exquisite hold feeling and sound omission in a traditional cover shape are realized.

The reed plate is realized by Suzuki’s reed research, technology and equipment. Raising the fitting accuracy of mounting reed on plate window to the utmost limit, having the established reputation for over blow, the reed plate is characterized as wide dynamic range and tenacity sound. Moreover, the more it is played the more it responses as if singing to the performer. Since the reed plate is hold by screws, replacement and maintenance can be done smoothly.

For major keys when playing low notes melody, first octave is used(see above image).
In this case bending is much needed, and controlling sound is difficult.

If Low key is used, the range is corresponding to second octave, playing with stable sound can be possible. There is a possibility that it will bring new expression. Furthermore thanks to the increased thickness of the cord sound, it will be fascinated by the sensation of trembling the air. Low key will bring new possibility of performance to players.

*Above image is available keys for Manji.

Big projected lower cover of Low key is a proof of the big volume.

Photo of standard key taken from front side.

Photo of low key taken from front side.

To obtain sufficient volume in low tones, it is needed to increase the amplitude of the reed. However if the amplitude is larger, reeds hit the cover especially on the breath side. Therefore, as a result of enlarging the cover according to the magnitude of the amplitude, it became this unique form. The point that it was able to obtain a larger amplitude is the high airtightness realized by high precision machining. Because the airtightness is high without not losing breath, breath reaches to the reed directly, so that the reed vibrates well. By inheriting sound like "MANJI" to the Low keys as well, it become possible to smoothly switch from existing keys.

For the frequently used seven keys of G,A,Bb,C,D,E,F, each scales of minor, natural minor, contry and senventh are available.

It makes it possible to perform that makes more effective use of the music atmosphere. Other keys are available on special order.

*Coutry(chart CCT) : Against Major(Regular), pitch on No.5 breath note is higher by half. Due to this, playing melodic music by second position is more smooth.

*Seventh(chart C7th) : Against Major(regular) tuning, No.5 and 9 breath notes are higher by half. Due to this, playing melodic music by second position is more smooth.

Style that can be chosen. Olive is melodic, Manji is bluezee.

As OLIVE is good at pops and jazz, sister model MANJI exercise the real advantage to play blues and rocks with many bump style because of tuning that put value on "chord sound". The sound hole widely opened on the back and side of MANJI gives the player the best sound return. It is the model that realized exquisite hold feeling and sound drop out with the traditional cover shape. OLIVE is to Melodic, MANJI to bluezee. Both reeds are tuned exclusively, it can be chosen according to the play style.

Brilliant green cover is imaged from OLIVE concept. This color adopted a nature-friendly method that does not use plating or paint at all. It features a distinct round and warm sound with core that sounds thick and straight from the cover opening at the back. OLIVE is tuned to equal temperament, it is compatible with pops and jazz performance, and among the Suzuki 10 Holes series, it is a sister model of the blues style model MANJI which became the best seller with a hybrid body. 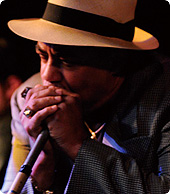 MANJI fulfills my requirements of harmonica player very well. This streamlined body is easy to play and comfortably fits in hands. Despite having a sense of volume, high sound quality that the true professional harmonica player says, it is light weight, enabling advanced and free playing. I am proud to play with this wonderful harmonica.

【Profile】
Born in 1951 in Chicago. I woke up to the blues while I was in the University of Illinois, went to the blues club in Chicago and studied harmonica from Big Walter Horton, James Cotton, Junior Wells, Carey Bell. In 1975 defeated the Little Mack Simmons of the Chicago Legend with a harmonica battle, making it famous.

He played for 6 years as a harmonica player of Willie Dixon band instead of Carey Bell.

And he formed his own band, Billy Branch & the Sons Of Blues.

After that, for over 30 years, as a master of the harmonica of Chicago Blues, the real active Chicago bluesman is still present.

For many years, he has hosted "BLUES IN SCHOOLS PROGRAM" and teaches the wonderfulness of Blues to children in the whole country and all over the world. 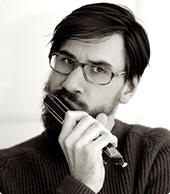 Manji Low key sounds the most powerful and well than any Low key models I have ever played. Phosphor bronze reeds give stronger and clearer vibrancy to the bass range. Let’s play the wonderfully tuned, rich and punchy sound. Suzuki expanded the lineup further with Manji Low key.

【Profile】
A Swedish born harmonica player and a musician. He holds a master degree of Stockholm Royal Music Academy. Playing wide range of music genres ranging from jazz to Portuguese folk songs to Swedish folk songs. In 2005 he had two gold medal awards in a German harmonica contest. While performing at the world stage, he is also engaged in teaching harmonica and music. The album is also released from the indies label. Future success is expected more and more.