If you are playing slide type chromatic harmonica, you would think like this one time.

"I wish to have a tremolo sound with this harmonica ..."

Tremolo Chromatic harmonica SCT-128 was developed to realize this wish.

While explaining the structure of this model, we introduce development secret stories until birth.

There was one difficulty in developing tremolo chromatic harmonica. In order to have tremolo stable with a beautiful sound, it is required to pronounce the two reeds in a separate partitioned space. In addition, when tremolo is made by overlapping two slide type chromatic, the intrument become big loutishly and the playability become bad. So what emphasized is to realize a beautiful tremolo sound with ease of operation(compactness, playability> which is the same as single sound slide type chromatic. Because of the problem of slide and size of harmonica, reeds are not overlapped but placed back and forth. However, as the reeds are buffered and tremolo sound is not stabilized. So reeds are arranged not by straight vertically but separate the whistle chamber of fundamental tone and tremolo reed by arranging reeds sidlingly.

What is the meaning of streamlined form… 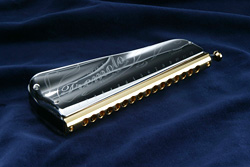 Although direction of the design was settled, it was difficult to fit the reeds as described above to the interval of already established holes on mouthpiece. Although streamlined form was designed by 3D CAD, it was necessary to cut out the wood to make sure the solid configuration and to make prototype model step by step while checking the ease of holding and vibrancy of the sound. Furthermore, it was very difficult to make a mold according to its prototype, until then it could only be made in a very simple form.

The key point whether to proceed from here is left to the person in charge of making mold. In the voice of the person in charge saying "I do not know whether I will be able to do it or not, I have to actually do it", everyone involved in this harmonica project think “if it cannot be success here, we have to give up ...”.

However, in order to create the novelty of this harmonica and new value, everyone got together and we got a powerful word "I can make it somehow" from the staff in charge of mold, and it was succeeded.

The tremolo chromatic harmonica thus made has a characteristic shape like a piano. That is because it was necessary to bring the reeds for fundamental tones and reeds for tremolo tones as close as possible to stabilize the tremolo. There is no unnecessary design, all designs were made by necessity to create this sound. We think because it is a meaningful form, it is more beautiful.

To everyone who loves harmonica

It is said that this tremolo chromatic harmonica SCT-128 is a little expensive, but production is difficult and it takes time and effort. It is the price that gives priority to the feeling that we want you to use this harmonica by all means.

If you perform with tremolo chromatic harmonica, it is no doubt you will be conspicuous!
Harmonica is an instrument that we can play anywhere. Please take them out anywhere, such as live houses, streets, parks and karaoke and enjoy your performance.